The real name for this creation should be My Super Simple Easy Peasy Totally Cheater Faux King Cake.

First of all, this really isn’t a recipe … it’s more like a confession …

Yesterday was Fat Tuesday, which we (my family) really don’t celebrate … but this year I was feeling the need to participate (in a very small way) in this New Orleans tradition.  Let me explain …

So here are the directions for My Super Simple Easy Peasy Totally Cheater Faux King Cake.  This is so easy that I’m just giving you the photos …

Transfer to a plate 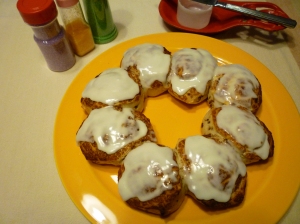 7 thoughts on “King Cake … and I am happy that I don’t own a bread machine!”