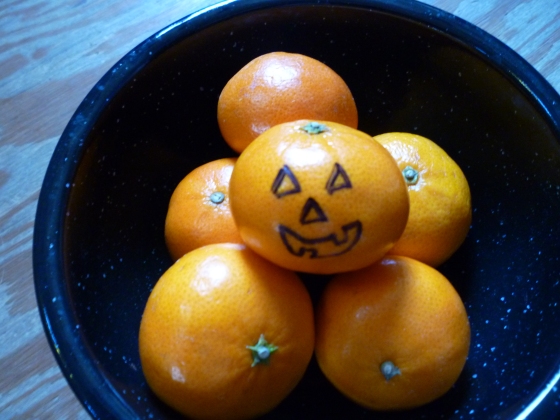 Aren’t these the cutest little jack-o-lanterns?  Well, they are really tangerines and a face drawn with a Sharpie marker … which is non-toxic.  My friend, Gwen, made them … she is so clever!

We just got home from camping … which is where I made these yummy biscuits for breakfast.  This was my second attempt … the first try ended up in the bacon syrup mixture being burnt beyond recognition … that is when I found out that my trailer’s 1966 oven had a mind of its own!  There was smoke pouring out the windows and door … it looked like a Lucy episode.  This time was very successful, here is the proof …

Hot out of the oven!

Let me apologize now for the lack of photos … I got sidetracked … it happens often … I wanted to make sure that nothing got burnt, this time.  But, all of us thought that this was so yummy … it needed to be shared.  I would describe it as a maple caramel bacon biscuit … wonderful and evil at the same time 🙂

The recipe is from King Arthur Flour … I simplified it by using store-bought biscuits.  Here is a quick summary … and then the recipe with full directions.

First, make the maple-bacon syrup mixture and spread it in the bottom of a lightly greased square pan …

1/2 pound bacon, cooked until medium-brown (or 6-8 strips of pre-cooked bacon)